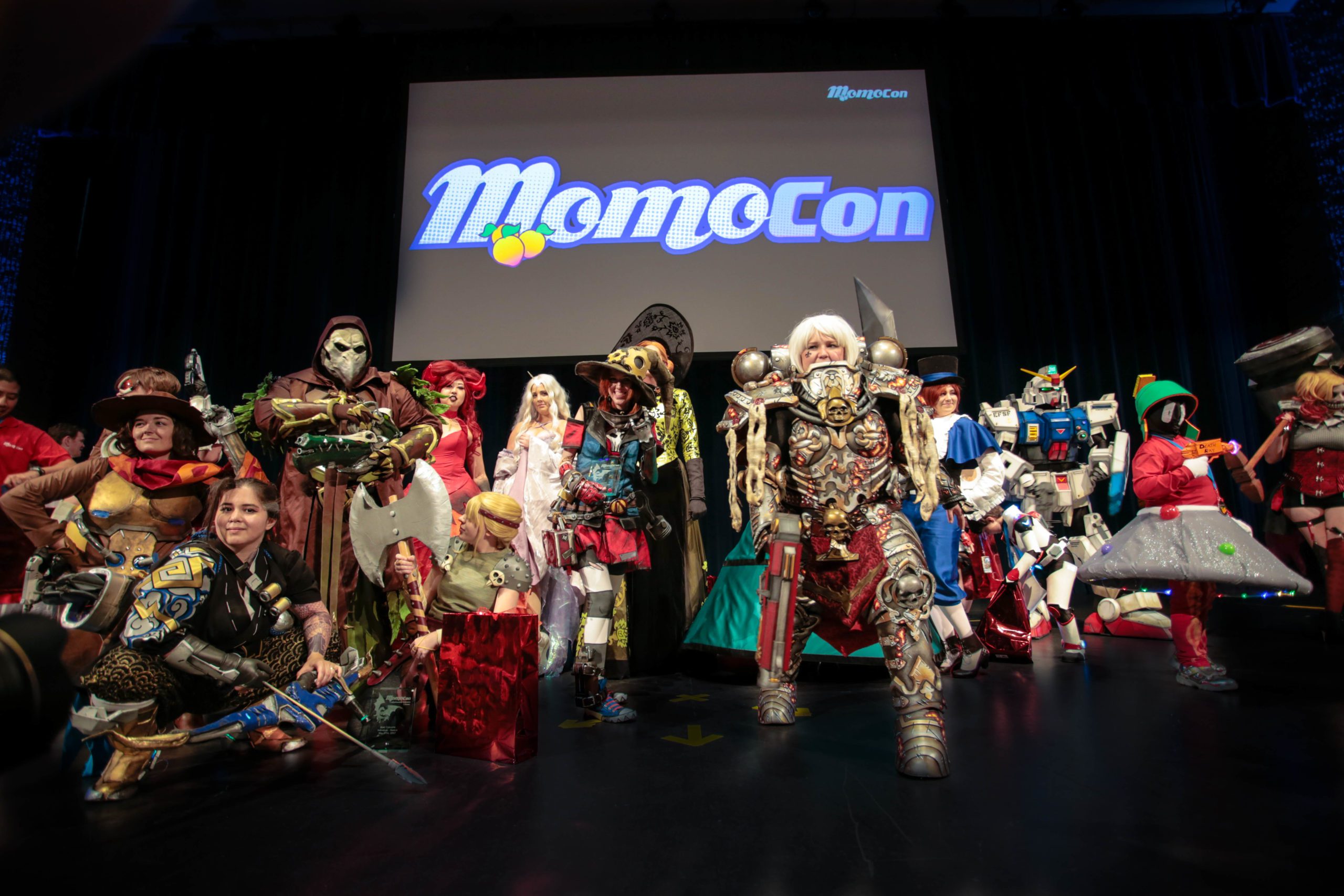 Held each MomoCon on Friday night, the Cosplay Showcase (formerly the Closet Costume Contest) involves getting into the spirit of cosplay and really becoming the character on stage!  Contestants are judged on screen accuracy and/or their spirit of cosplay, including poise, presentation, and enthusiasm!  This contest is intended for attendees who have made 60% or less of their costume by hand.

Judges for this contest are not representatives of MomoCon; they are experienced costume and prop makers 100% external to the organization and rotated in 1-2 year cycles to attempt to reduce bias and provide new pools of experience for the attendees participating.  If you have any feedback or issues with judges and the judging process, or have any questions, please contact info@momocon.com.

One of the largest MomoCon events each year, the Craftsmanship Costume Contest brings out competitors on Saturday night to display some top tier cloth craftsmanship and prop making!  Participants are judged on craftsmanship primarily, and as such this contest is intended for attendees who have made 60% or more of their costume by hand.

Judges for this contest are not representatives of MomoCon; they are experienced costume and prop makers 100% external to the organization and rotated in 1-2 year cycles to attempt to reduce bias and provide new pools of experience for the attendees participating.  If you have any feedback or issues with judges and the judging process, or have any questions, please contact info@momocon.com.

Please stop by the judging timeslot sign ups to secure your time for judging on site beginning at the Cosplay Judging Room, B-218 in the Georgia World Congress Center as early as Friday at 2PM (until 5:30PM) for one of the 20 judging slots on Friday or one of the remaining 30 slots on Saturday. Starting at 10AM on Saturday we will fill the 70 remaining slots.

Want to participate in either contest without being judged for prizes, just to show off your costume on stage?  Be sure to check out the Walk-On only options (when available)! Musclenerdz is a group that was designed to bridge the gap of fitness and cosplay.  For the last two years they hosted a Cosplay/Bodybuilding competition at DragonCon, but they want to give you more! Owners Jerry Peacock and Ryan Crissey are bringing Musclenerdz to MomoCon 2023! Bigger, Better and with a lot more Surprises this Showdown will showcase the best cosplays and physiques the cosplay/fitness community has to offer!
Registration for the competition is open now!

Do you think you have what it takes to be MomoCon’s Top Idol? Do you often find yourself enthusiastically mouthing the words to that new song or breaking out into the dance choreography from your favorite video? Can you do it for a crowd and take home the trophy?

Submissions open in Jan for 2023

We’re back for a new year of Disney goodness at MomoCon 2023! Join a host of singers as they compete for fabulous prizes singing their favorite Disney songs!

Submissions open in January. To compete you will need to sign up and submit samples within the window (Jan to March).

For non-competitors, please join us on Saturday of MomoCon to hear some great performances!  There are no restrictions on performers, but we do ask that out of courtesy, previous top prize winners refrain from entering again.

MomoCon is happy to host our annual Disney Sing Along Contest! We had some really overwhelming demand for the event that goes up every year, so get your submissions in! Please read the rules and submission guidelines below for more details. The contest will be held Saturday afternoon at MomoCon 2023. If you cannot be at MomoCon at that time, please do not submit, as pre-screened finalists will perform in the finals on stage at MomoCon at that time. Being present for the finals is mandatory for any finalists wishing to compete for prizes!

We love Disney songs, and we hope you do, too! This contest is a platform for you to show off your best princess voice, or Randy Newman impersonation, to possibly win some great prizes! The best part? The Grand Prize winner will receive a ticket to Walt Disney World! No joke, straight up, a ticket to the most magical mouse-inspired Florida destination! The top three in the contest also receive cash prizes!

How do I compete?

You’ll need to submit two vocal samples of the two song choices you are auditioning with! Please apply between now and March 10th, 2022 for consideration in the contest.

Pre-judging is 100% based on vocal performance and variety; we have a panel of judges with professional vocal experience ready for all entries. Stage judging for finalists will be 90% vocals and 10% presentation. Finalists will be notified of acceptance in mid-late March.

Judges for both the pre-judging process and on site final judging are trained singers, from those who have 10+ years of performing experience to even music theory teachers. Judges recuse themselves for any submissions from people who are personal friends or family. Judging is hosted blind, without information about the submitter, and while video submissions are allowed, pre-judging is completed based on vocals alone. Lower quality submitted files are not penalized versus high quality recordings (judges may ask for a second file if there is an issue with audibility).

First place will receive a one-day park ticket to Walt Disney World (no hopper option). This ticket can be used at any of the four major parks on the Disney property in Orlando (Magic Kingdom, EPCOT, Animal Kingdom, Hollywood Studios) and is valid for one year. Should this not be available, a Disney gift card for the amount of a one-day park ticket will be provided. Second and Third place will receive prizes from MomoCon (manga, comics, plushes, DVDs, etc.). First through Third place also will receive cash awards.

Submissions for the AMV and V-Mix competitions are coming soon!

MomoCon’s AMV Contest welcomes submissions from all forms of animation. We also have a separate V-MIX (Video Remix) Competition for Cosplay Music Videos and Live Action submissions. V-MIX Competition winners will receive an award and a free membership to next year’s convention (MomoCon 2024).

Stay in the Loop!